Today is a day off from The Bet. This is purely because yesterday was Boyfriend’s birthday and I allowed him to watch TV. When he asked if he could, I didn’t want to waste a tube journey of reading with only the London Evening Standard for company, so I chose to have today as my day off instead. Man, I forgot how much easier tube journeys are when you have a book for company. Whole stops went by and I didn’t even notice people getting on and off, or the doors opening, or the fact that we were even moving along the tracks. A 45 minute journey suddenly felt like 10 minutes, but I managed to get through 100 pages of Zoe Marriott’s ‘The Night Itself’! I recommend it if you’re into Young Adult books. It involves a 500 year old Katana, and a 15 year old girl defending modern day London from a Big Bad. Also the cover is very pretty: 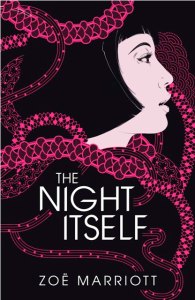 The girl in the bookstore even commented on it and said she wanted to read it.

However, until today, The Bet has gone well. I discovered a new interest in playing games on my phone, which considering I have the world’s crappiest smartphone, is impressive. I can’t have more than one game installed at once though. It drains my memory. And I’ve discovered that if you stand up against one of the doors at either end of a tube carriage (the doors that connect to the next carriage along), you get a nice blast of cold air on your hot neck every time the train leaves a station – perfect for long, sweaty, tube journeys.

The flat is also looking tidier, as getting in from work now means I haven’t really got much to do. If I go into the bedroom to watch TV, I’m liable to fall asleep and then I’ll waste the whole evening, which I don’t want. We’ve also been busy each night so far – Tuesday we went to the cinema (Monsters University is an amazing movie), and Wednesday went to Boyfriend’s folks place for a birthday meal. Tonight we’re having drinks after I’ve finished work, and tomorrow we’re heading to Brighton for the day! This means I haven’t really had a lot of time where I would be reading.

The true test comes on Sunday – Tuesday, when I’m off work with no real plans other than wanting to relax in the sun and read on the patio.

In a weird way, it’s almost cleansing to not be able to read and write whenever I want to. It means I have to find other ways to pass the time and I’m already working out ways for me to fill it. For example, I’ve owned a book on making origami jewellery for 18 months and haven’t done anything with it. This would be prime time to making a go of it. I may need to find a craft shop first to pick up a few bits, but even if not – I have the suitable paper ready.

Before, I felt I should be writing, and thus it became a chore. But right now, because I know I’m not allowed to, I’m feeling that when I win the bet (hehe), I’ll want to again. I feel I will have missed it because I’ve been banned from doing so. I’m also planning on fully printing my draft of We All Fall Down and editing it the old fashioned with – with a red pen! I have plans to look forward to, which is really nice.

In the meantime, I have another 250 pages of The Night Itself to read before midnight! Enjoy your weekend, folks!

Posted in None of the Above

Tags: reading, The bet, The Night Itself, writing, Zoe Marriott

GUESS WHAT?! No, seriously!

The other week, I was browsing Twitter when some lovely person brought the wonderful blog of YA author  Zoë Marriott to my attention via a retweet. On her blog I found writing and awesomeness in abundance, and also a competition to win signed books! BOOKS! Naturally, I entered.

Zoë sent me a brilliant parcel consisting of her own books ‘The Swan Kingdom’ and ‘Frostfire’, ‘Unrest’ by Michelle Harrison, ‘The Iron Witch’ by Karen Mahoney and ‘Angel’ by L.A. Weatherly. I am so freakin’ excited about reading these books! They all sound awesome! And they are all SIGNED! I have never owned a signed booked before and now I have FIVE! 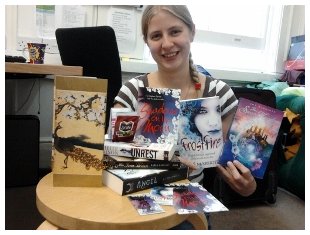 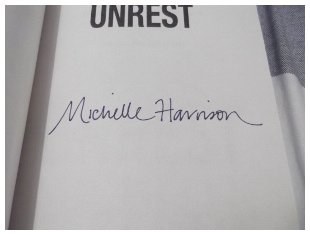 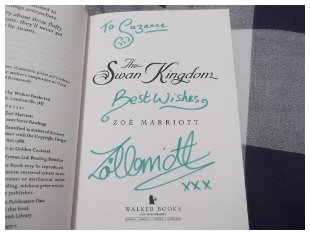 Of course this is going to destroy my bank account as I proceed to purchase further books by all these lovely people. I can just see it happening. It’s almost like I’m psychic or something.

All the author’s are wonderful for donating the books and taking the time to sign them.  Check out their websites for more wonderfulness:

Posted in None of the Above